But who was Kossuth and Széchenyi and why were streets renamed after them in Debrecen and throughout Hungary? What was their connection to each other, and Debrecen?

Who Was Count István Széchenyi?

Széchenyi Street was named after Count István Széchenyi who is remembered today as Hungary’s greatest statesman, but he was much more besides. 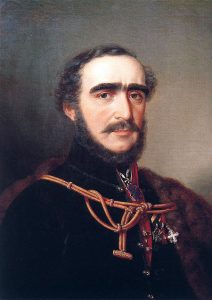 He was born into the noble Széchényi family on 21st September 1791.  The Széchényi family was loyal to the House of Habsburg and they wielded great influence, consequently, he grew up between Vienna and the Nagycenk family estate in Hungary.  Located just 12 km from Sopron. Today, the castle of Nagycenk, the surrounding park and Lake Ferto, (largest saltwater lake in Europe), is listed as a World Heritage site.

From a privileged youth to statesman, István’s adulthood began in the military at just 17 years he served in the Napoleonic wars.  During his time in the military between 1815 and 1821, István traveled extensively around Europe where he became interested in institutions of state and political reform and was greatly influenced by changes taking place in England at the time.  He also visited Debrecen during his military years.

In 1825 Count Széchenyi helped found the academy of science by making a large donation, and by doing so convinced others to donate as well, and thus enabling the foundation of the Hungarian Academy of Science, and with royal approval.  (picture here?)

In 1826, to pursue his political aspirations he began by forming the Nemzeti Kaszino (national casino), a platform for patriotic Hungarian nobility to discuss political reform, which played an important role within the wider reform movement.

To reach a bigger audience within the Hungarian nobility, Széchenyi published his political ideas in a series of political editorials where he famously condemned conservatism and their tax-free status while promoting modernization.

Besides his political aspirations, Széchenyi set about modernizing the transportation network of Hungary becoming an influential figure of the Danube Navigation Committee.  He was instrumental in turning the Danube into a transverse able commercial trade route through the regulation of the flow of water.  He was also a champion of steamboats on the Danube, Balaton and the Tisza.  Also, he supported the construction of the Chain Bridge in what later became Budapest.  With regards to Debrecen, in the 1840s he worked on the regulation of River Tisza for which he was awarded honorary citizenship of Debrecen.

It is somewhat ironic that the reform movement he promoted and helped to found, ultimately led to his downfall in political circles, because he was one of the aristocrats that were sidelined for not being reform-minded enough.  He failed to support the ideas of Lajos Kossuth and the ideas of democracy, with his loyalties firmly rooted in the House of Hapsburgs and the ruling aristocratic elite.

With the fall from grace of Count István Szechenyi, came the rise of Lajos Kossuth during the “Long debate” of the reformers in the press between the years 1841-1848.

Who was Lajos Kossuth?

As a young passionate political journalist, and lawyer, Lajos Kossuth words are attributed to inspiring the Hungarian Revolution and the struggle for Hungary’s independence from Austria. 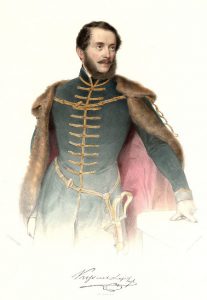 In contrast to István Szechenyi, while Lajos Kossuth’s family were noble, they were not wealthy, this was a defining aspect throughout his life, – the unfairness of financial inequality.  His family was religious, Lutheran’s, – Protestants of Slovak and German descent. During his childhood, he studied at the Protestant academy of Sárospatak.

While aspiring to be more than just a lawyer, he was limited by his family status and his financial means.  He applied for a government position and was rejected.  It was only natural that, from these beginnings that he would later gravitate toward the reform movement, rebelling against inequality and the Aristocratic system that maintained it, but also from the system that rejected him.

The crystallization of his beliefs is attributed to an event that began between 1832 when he attended the national Diet in Pozsony, where he was surrounded by the radicals of the reform movement.  It was here during the national diet and the debates that took place that he formulated his political and social philosophy of radical reform and the need to free Hungary from the rule of the Habsburgs.  Throwing caution to the wind, unaware of the dangers he faced by doing so, he reported on the debates that took place and his beliefs, and published them widely, inspiring a movement across Hungary.  On May 4th, 1837 he was arrested and jailed for 3 years for subversion and exited jail a national hero.

For the next 8 years, Lajos Kossuth showed that the pen is mightier than the sword, writing firstly for Pesti Hirlap and then later for the German-American industrialist Friedrich List.  His words were inflammatory, antagonizing to the leadership and he can only be described as an agitator, which ultimately got him fired from Pesti Hirlap in 1844.

While Széchenyi fought for a positive relationship with the Habsburgs, gradual reform and a strong agriculture sector ruled by the aristocratic landowners, Lajos Kossuth rejected them entirely and instead favored industrialization.

On March 19th, 1848, the General Assembly of Debrecen elected Lajos Kossuth as the leader in the revolution against Austria.  In 1849 the Hungarian Revolutionary government fled Pest-Buda (now Budapest) to Debrecen and by doing so, making it the capital.  In April 1849 Lajos Kossuth gave the speech of independence in the Great (Calvinist) Church.

Lajos Kossuth’s position of leadership was short-lived, losing to the alliance of Habsburgs and Russians.  The final battle took place close to the Western flank of Debrecen.  Lajos Kossuth fled to Turkey and then the United States, stopping on the way in London where he settled for a time.

Both Lajos Kossuth and István Széchenyi were both famous in their lifetimes, both married and had children, however, the failure of their vision for Hungary ultimately led to despair.

István, while achieving much, suffered, from depression, shot himself in the head, committing suicide.  While Lajos died in exile, his subsequent extreme ideas either failed or were rejected by Hungarians. Despite their sad endings both are celebrated for their contribution, moments in time that echo through the ages, memorialized with statues and street names aplenty.